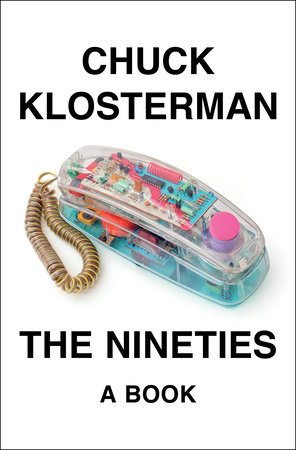 Read the New Klosterman, But Can Remember Nothing

Our reading tastes change as we age.

Our writing styles change as we age.

Two very ridiculously obvious statements that are hardly groundbreaking. But I kept thinking about those concepts as I read Chuck Klosterman’s The Nineties: A Book. One or two of those simple statements were clearly at work, because yeah, I read it. But I can hardly recall anything from it.

As a white male writer, obsessed with eighties hair metal and sports, Klosterman was a sort of a role model when I began my career. Here’s another absurdly obvious statement: His work influenced my own book Power Chord: One Man’s Ear Splitting Quest to Find His Guitar Heroes. That’s as obvious as saying that Kingdom Come was influenced by Led Zeppelin. (Eighties metal inside joke there.)

I had not read some of Klosterman’s more recent books so I was excited to return to his work with The Nineties. When I finished the book, I noticed something. No sticky notes.

I like to use those small, narrow sticky notes to mark favorite phrases or arguments in books. Klosterman’s earlier books on my shelf are full of them. And I can remember some of the best points. I still use his line about Van Halen’s use of keyboards as the “Roe versus Wade of heavy metal.” I told someone the other day about Klosterman’s argument that Billy Joel was one of the most popular musicians on the planet, married to the most gorgeous woman on the planet, and yet you still never pretended to be him.

But there isn’t a single sticky note in my copy of The Nineties. Not a single instance where I thought, “I have to tell this to my buddy.” The one component that generated the most passion for me is the cover. I just can’t get over my own recollection (quite possibly flawed) that a colorful, see-through phone was an artifact of the eighties. Granted, Klosterman’s central thesis is that our collective memories of a given decade are not bookended by the literal dates on a calendar. So perhaps that phone is meant to show the carry over.

But in regards to the text itself? I mainly remember an extended look at polling data related to Ross Perot’s 1992 presidential campaign. An examination that could have just as easily been published by a source like Politico because it contained none of the Klosterman memory rabbit holes, filled with embarrassments we can all relate to.

It seems as though I’m not the only one nonplussed by The Nineties. The New York Times review ended with the conclusion that “Klosterman cunningly sets a low bar for this project. Does it clear it? Well, yes. No. Sometimes.” Megan Volpert at PopMatters points out that “The Nineties contains very few statements in first-person and no stories about the author’s life, even though this more hybrid and intimate approach to non-fiction is what sealed the deal with his early fan base.”

Maybe he’s gotten old and wants to be taken seriously.

But that clean stack of pages in The Nineties, compared to the sticky note blizzard on Chuck Klosterman’s earlier books, indicates a lack of impact that is too clearly obvious.

Breaker One Nine, Good Book Coming at Ya